The World of Blogging

Today I made a decision to start a blog. I have seen so many of my special needs mamas start a blog. For some it has been a release of stress, for others it is about keeping family and friends informed, and some use it as a way to educate. For me it is all of the above. I have gone back and forth on whether or not I want to post our story. I ponder the thought of no privacy but really whose life is private anymore right? Plus, our story is of hope and strength. Why not share that with everyone. I have a lot of catching up to do since I am now starting to document our adventures at 3.5 years into our life with kids. Hey better late than never.

Just some back ground. I am married to my college sweetheart. We were married in 2004 and it was amazing despite a small hurricane that passed by on our wedding day. We set off on our life adventures in 2004 enjoying our honeymoon, working on the purchase of our second home and endless travels as a couple. We decided it was time to make our family a family of three. We already had 2 four legged children why not add another into our life. In April of 2007 I found out I was pregnant. It was the best news I could have wished for. We had been dreaming of the day of a positive pregnancy test and here it came. August of that year we found out it was a boy!! My precious baby boy who we named Hayden. I have been fond of that name ever since I babysat a little boy who was my love at the time many years ago. I always thought that would be my sons name and thankfully my hubby agreed. I went through the 38 weeks of pregnancy not complaining too much. I mean I was tired and sick in the beginning nothing to bad. We joked about Hayden coming before his due date of 1/12/2008 for a tax deduction. Little did we know that was going to come true. On December 30, 2007 my water broke at 9pm. At first I was not positive it was my water because when you are that far along things are out of whack anyway. We called our neighbor, called the doctor and off to KGH we went. My labor wasn't too terrible. I got an epidural which for me was painful, had some sickness due to pitocin, and was tired by the time my baby boy arrived. He made his grand entrance at 5:33 am on December 31, 2007. I remember this day like it was yesterday. The first time I saw him I fell in love. I cried because I was so happy. He weighed 6pds 15 oz and was 20 inches long. My sweet little boy. We ended up spending a week in the hospital since I suffered post partum hemorraghing. That was not a fun adventure. I lost half my blood supply and refused a blood transfusion. If anyone knows me I am such a worrier and was scared about contracting something from the transfusion. It took me months to feel better again. Looking back now I probably would have opted for the transfusion. Life was great when we came home. My baby boy was eating and sleeping well. We were first time parents so we really didn't know what to expect. I will write more about my exceptional little boy soon!

Fast forward 3 years or so. In October of 2010 we got our positive on our pregnancy test! To my dismay I bought six tests, yes six to confirm the positive. We got pregnant quicker this time so I really didn't believe the first test. Silly me!! In February of 2011 we found out we were having a baby girl. Of course little miss as we call her was not cooperating so we didn't believe it was true. We opted for a 4d ultrasound and there she was showing she was a baby girl. The best photo is of her sticking up her middle finger at us. Not once but twice. We knew we were in for it from that moment on. We named our baby girl Julia. She arrived on July 10, 2011 six days late. Funny, how my first one was early and my second one was late. She almost got evicted on July 12, 2011 but I am happy she came on her own. This labor was remarkably fast. My water broke at 5:00 am. Although, I think I may have started early labor the day before, I could barely walk down my deck stairs because I felt like she was falling out. This labor/delivery was night and day different than with Hayden. We didn't experience any of the heart rate drops or need of oxygen. I barely was able to get my epidural because I dilated so quickly. She was born at 11:32 am on July 10, 2011 with 4 pushes in a total of 10 minutes!! She came out yelling and moving her head. I took one look at her and my heart just consumed with love. I was worried how I would love two children but I did. I felt an instant bond with her. I couldn't believe how much she looked like her big brother Hayden with the exception of a full head of hair. Hayden had hair but not like hers. She was a big girl too 8 pounds 2 oz and 19 3/4 inches. I thought the scale was wrong because there was no way I was having an 8 pound baby. Later that day had to be the best moment of my life. Hayden came to see us. He was so excited to hold his baby sister. Pure love!
Posted by schlennerfamilyof4 at 1:38 PM 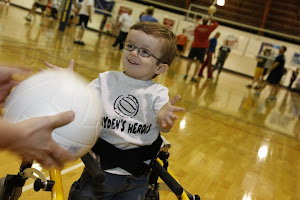 schlennerfamilyof4
I have been blessed with many things in my life. I have a loving husband and two wonderful children. My son Hayden who will be 5! and has been recently diagnosed with congenital cerebellar hypoplasia. My sweet girl Julia is 2 years old and recovering from post viral cerebellar ataxia. Life is an adventure but I would never change it!